New to Nour Academy? create an
account to get started today.

Diacritics are usually forgotten; however, they are extremely important in order to learn Arabic pronunciation. Diacritics تشكيل, pronounced as Tashkil, literally means Forming, which is its main function, since Arabic letters on their own, without Tashkil, do not show proper guidance as to the proper Arabic pronunciation. Therefore, learning diacritics goes hand in hand with learning Arabic. 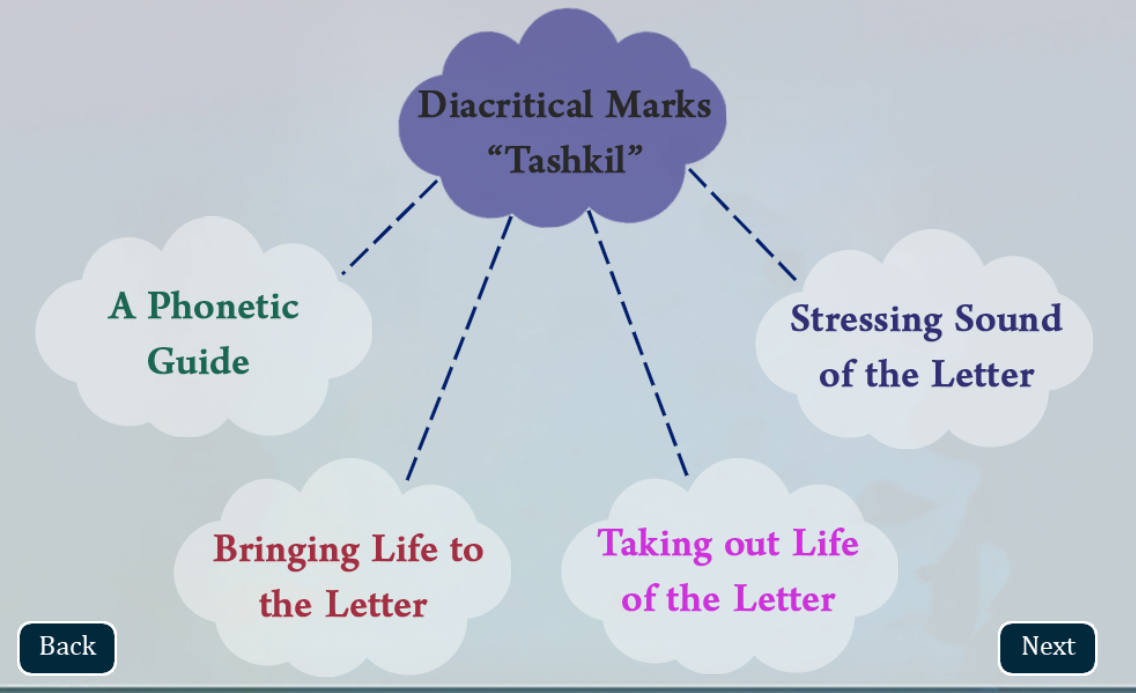 Diacritics are either written above or below an Arabic letter to indicate whether a letter is pronounced accompanied with a short vowel, a Tanween (a short vowel plus an /n/ sound), or not accompanied with a vowel at all (Sukoon). Arabic native speakers know them intuitively, so they are sometimes not written in Modern Standard Arabic. However, they are always present in the holy Quran or in places where a reader might misread a word. It is important to note that in order to benefit from this article you should know how to read Arabic letters first. If you do, please continue, if you don’t you can check out our article Learn to Read Arabic Letters first or join our read Arabic Letters Classes.

Fatha فاتحةَ is always placed above a letter, and corresponds to the /a/ Arabic vowel.

Kasra كسرةِ is always placed below a letter, and corresponds to the /i/ Arabic vowel.

Dammah ضمهُ is placed above a letter, and corresponds to the /o/ Arabic vowel.

Sukoon سكونْ is placed above a letter The Sukoon indicates that there is no vowel to be pronounced.

Shaddah شدةّ is placed above a letter and always comes accompanied with one of the vowels mentioned above. Shaddah is the doubling of a sound of a letter

Note how the shaddah with Harakat and these are the previously mentioned vowels (Fat-ha – Dammah) Both Shaddah and Sukoon cannot be placed at the beginning of a word.

There are three types of Tanween تنوين where vowels are read and followed by an /n/ sound.

For a more detailed explanation of Noon Sakinah and Tanween, look forward to our future article on the subject. One Arabic letter can have up to many different pronunciations depending on the diacritics placed above or below it.

As we’ve discussed before in our Learn Arabic Letters article, Arabic letters change their form depending on their position in a word. Additionally, the Shaddah and Sukoon cannot be placed on the first letter of a word. Let’s look at some Arabic Diacritics examples representing the main vowels below:

It is important to learn Arabic with diacritics in order to fully grasp the wide range of pronunciations that can accompany a single Arabic letter. Arabic diacritics become common place after practicing Arabic and becoming stronger in and more familiar with the language. At a later stage you can even read without diacritics.

If this article helped you understand diacritics better, take a look at our Theoretical Tajweed and Arabic letters classes at Nour Academy, where we delve deeper into the subject in detail to help you learn Arabic. Our classes focus on benefitting people who want to learn Arabic online. With our professional native Arabic speaking instructors and our specialized syllabus for online Arabic learners, we trust that you will have an excellent learning experience.